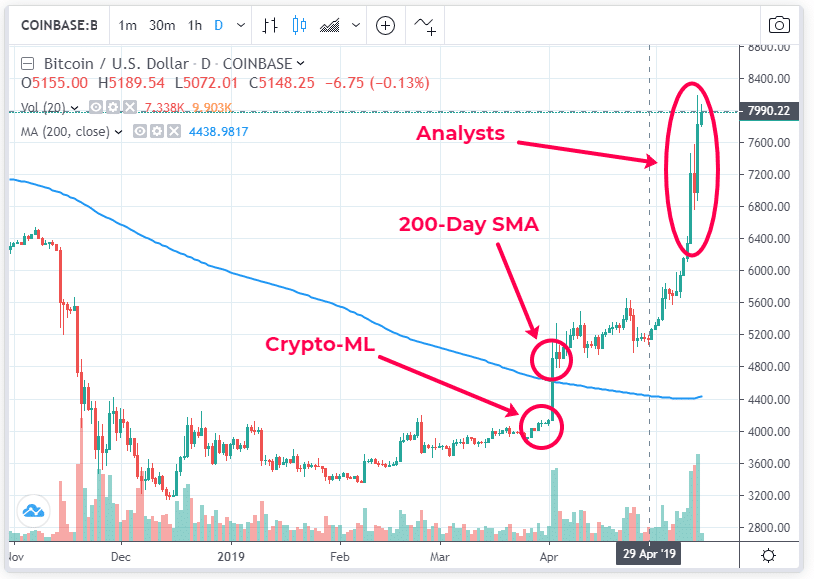 The cryptocurrency markets have absolutely taken off since early April. Whether you were a Free Member or a Trader Member of Crypto-ML, you received advanced notice and should have been able to capitalize. In fact, Crypto-ML called “bull” on March 29–a few days in advance of the frenzy.

This post will walk through the action from the last couple of months and illustrate how to use Crypto-ML’s tools in practice. It will also show how machine learning effectively predicted these moves before traditional technical analysis and speculative methods.

Disclaimer: Past performance is not necessarily indicative of future results.

The Transition from Bear to Bull Market

Bull markets are sustained periods of “higher highs” and “higher lows.” In general (and it is also our recommendation), during bull markets, you should take long trades or as some say, buy the dips.

Specifically, Crypto-ML recommends trading with the market aka swimming with the current. To do this, we provide the Market Index, which lets you know decisively if we are in a bull or bear market.

Three Approaches to Calling the Market

In 2019, we have clearly transitioned out of a bear market and into a bull market. Let’s take a look at the three ways you could evaluate this.

It is widely regarded that the 200-day moving average determines whether Bitcoin is in a bull or bear market (CNBC).

“The second sign came in April, when bitcoin closed above its 200-day moving average, a widely accepted technical indicator of bullish momentum.” – CNBC

This would have occurred on the April 2 “close” of the candle at approximately $4,900 BTC/USD, missing out on an approximately 17% single-day jump.

Analysts may mix a variety of technical indicators, news items, and other methods to officially announce a shift from a bear market to a bull market. Many of them occurred in early-to-mid March:

“…if Bitcoin closes May in green, it could signal that a full blown bull market is back in effect, as the trader states that the asset has only closed four consecutive green candles or more during a bull phase.” – NewsBTC

In general, analysts are mixed somewhere between $6,400+ as the point of calling it a bull market. This missed out on the large jump in April.

Crypto-ML uses a machine learning model to predict the market. Fundamentally, the model has the goal of predicting the average movement of the broad crypto market over a 30-day timespan.

More specifically, if the model decides to increment the Market Index and average prices move up, then it earns a point. If it increments the index, but prices drop, it does not. Likewise, it gets a point for dropping the Market Index ahead of price drops.

For more detail, read more about How the Market Index Works.

Using this technology, the Market Index is incentivized to be ahead of the curve. It is predicting.

Leading the pack, the Market Index called the end of the bear market on March 29.

Of course, the market will continue to move and may dip back down into bear territory, but it’s clear the Crypto-ML Market Index called “bull” ahead of technical approaches and analysts. This occurred during a sideways market, allowing Crypto-ML members to capture the run-up rather than joining in afterward.

The Value and Math of Machine Learning

In this case, had you opened a long position on March 29 per the Crypto-ML call, you would have spent a couple of boring days going sideways, then you experienced lift-off.

As an investor accumulating for the long term, you:

As a trader, we’re yet to see. Trading has the advantage of capturing profits along the way, albeit while accepting small losses. While an investor’s “paper gains” can evaporate, traders seek to lock in gains along the way.

Since the Market Index went positive, we recommended following our long calls (generated by machine learning):

Want to see exactly how powerful it is to lock in trades instead of just holding? Check out our Trade History and look at the “Account Value” column relative to the “Buy and Hold” column.

Did You Miss Out?

If you missed these price surges, hop on in! The Crypto-ML Market Index is free as part of our Free Plan.

And if you want our trade alerts, see our Trader Membership, which you can try for free for 30 days.