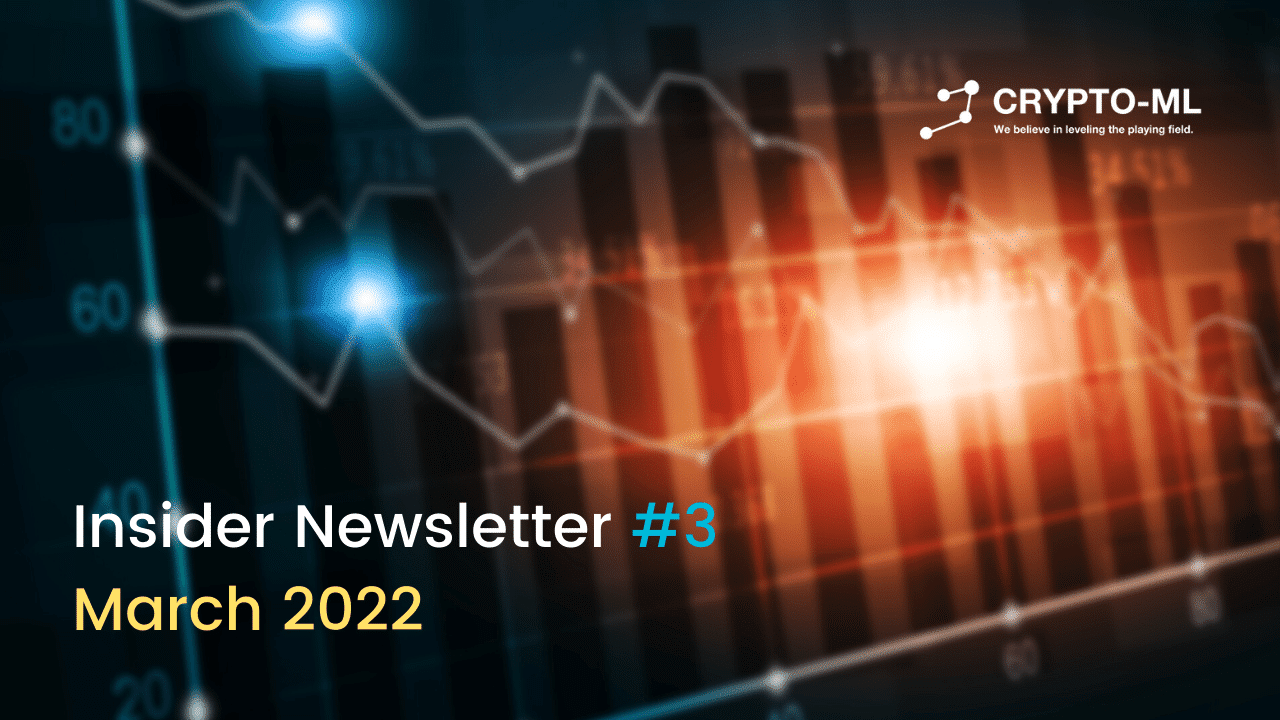 Thank you for being an Insider! In this month’s newsletter, we’ll walk through the evolving global situation and cover macro, on-chain, technical, and proprietary data. This information is intended to help you understand the big picture and optimize your long-term holdings.

When Bitcoin is in the green channel, it’s generally a good time to invest for the long term.

Our Price Channels show, based on long-standing past patterns, buying throughout $29K and $43K will be an effective approach for long-term investments.

As you’ll see in our analysis below, bearish and sideways behavior may persist through mid-Summer, so consider investing at various price points within the green channel between now and then.

But once a bullish break does happen, we could be looking at a fast move to $68K (yellow) and not hit “greed” until $106K (bottom red).

While the news of COVID caused an exception to this model in March of 2020, you notice the war has not. We’ll discuss some of the reasons for this below.

Our Market Index shows we’re still in a bearish phase. Bitcoin is slowly easing out of fear, but most altcoins are still lagging. It is common for Bitcoin to lead major shifts in price action.

This is notable because, despite fear-mongering in the news, the sentiment is more positive now than it was in January. This is indicative of a broader recovery in global markets.

Echoing the Price Channels, the Market Index is suggesting this is a good time to make long-term investments.

Overall, the macro-economic picture is more positive than many analysts will have you believe. Economic recovery from COVID is showing in the numbers. The wild cards to watch are war and actions from the Fed.

Where to start? This has been an unbelievable few weeks. While the crypto markets have responded with large intraday swings, price has largely whipsawed around the $40,000 mark without being truly decisive.

In general, if you are an investor with a long-term horizon, you want to be a net buyer during downturns and times of uncertainty. Again, this matches what we see in the Crypto-ML indicators.

Also, do not hedge scenarios like nuclear war. If worst-case scenarios happen, all bets are off and all markets are impacted. It’s not reasonable to plan your financial future in this manner.

As you evaluate the cryptocurrency market, remember that crypto tends to move with traditional markets, especially other speculative assets. Although Bitcoin ideally is a hedge to traditional markets, this has not yet proven to be the case. If you see a broader stock market crash, expect Bitcoin to crash as well.

In NATO’s effort to avoid war with a nuclear power, economics are being used instead of military might. This has caused a substantial impact to Russia’s economy and will likely trigger the collapse of certain Russian industries and global partnerships.

Most people overestimate the global economic role of Russia. Russia’s GDP is about the same size as that of Texas (USA Today). This means the effect on broader global markets should not be as significant as many people expect.

However, the impact will hit specific industries (wheat, oil, airlines) and will likely disproportionally impact emerging markets in Africa and parts of Asia. This can be mitigated with aid from the Western countries driving the sanctions.

All-in-all, the sanctions should not drive a global market collapse or recession.

Russian citizens, however, will see a tremendous impact and further isolation.

Within a week of the first sanctions, the market cap of Bitcoin flipped the value (investing.com) of the Russian ruble.

And while we just stated that Bitcoin follows the movement of traditional markets, especially speculative sectors, its value as a sovereign currency truly shines for Russian citizens in times like this. Some Russians have been able to protect their wealth by moving it to Bitcoin. Bitcoin price is moving opposite the ruble and their local markets.

We hope for a fast, peaceful resolution to tensions in the area. This situation causes a great deal of harm to people: people in Ukraine, people in Russia, and people in many other countries.

Despite the fear-mongering headlines, there are numerous positive factors across the global economy.

This is all positive news for the crypto markets. The healthier the markets, the more investment you will see in the tech sector, cryptocurrency, and altcoin companies.

The US Federal Reserve meetings continue to cause strong reactions in the markets. Inflation must be managed via monetary policy, namely interest rates. So far, the Fed has taken a measured approach, but if hikes occur in an unexpected manner (faster than expected), we will see global markets respond negatively.

This week, Biden’s Executive Order entitled “Ensuring Responsible Development of Digital Assets” was released, which directs federal agencies to research and begin laying the framework for the United States’ future role in cryptocurrency.

As the details emerged, Bitcoin jumped about 9% but has since retreated.

Fundamentally, this Executive Order is a positive step in legitimizing cryptocurrency and ensuring the United States becomes a leader in cryptocurrency innovation.

As we personally work with many technical people across the globe, it’s apparent that crypto, blockchain, and Web3 money is flowing into geographies that embrace crypto. Hopefully, these measures ensure the United States does not get left behind.

While some critics have noted this research simply delays much-needed regulatory clarity, others are happy to see a thoughtful and deliberate approach that will avoid rash decisions and minimize unintended consequences.

“Leading up to this executive order, the narrative that had been circulating was that the administration was set to crack down on crypto,” Mr. Reiners said.

“This executive order is a complete 180 from that,” he said. “This is as close to an embrace of crypto as you could have hoped for from this Biden administration, if you’re pro-crypto.”

Some critics are taking extreme positions, such as Robert Kyosaki (Rich Dad, Poor Dad), who sees the Executive Order as a way of seizing all crypto and driving the price of Bitcoin to zero.

Rather than following the extreme reactions, you can view the facts yourself.

Overall, this is a measured approach that should be positive for crypto. We have yet to see how it will play out though.

Who has been buying this dip?

Looking at value by Bitcoin ownership, addresses holding between 1,000 to 10,000 Bitcoin have been doing the majority of buying during this dip. These are big players.

Regardless of the amount held, the total addresses holding a balance have continued to steadily rise even while the price has dropped over the last few months. This means more users are on the platform which is bullish for the long term.

Stock-to-flow is a number that represents how long it will take to produce current stock given current production (flow). Learn more here.

This matches many other long-term views that show Bitcoin is at an “extreme” point that may indicate a reversal is due. As you can see, the red line (Bitcoin price) tends to yo-yo around the stock-to-flow line.

On-chain data paints a favorable picture of our current position.

Every indicator points to a potential worst-case of around $29,000 for Bitcoin. This is true for our Price Channels, and you’ll see it in the charts here. Markets may struggle until mid-Summer.

That said, if $40,000 can be established as strong support, we may see the start of a recovery. This likely won’t happen until mid-Summer.

Large patterns showing we may trend sideways until Summer:

These levels can be drawn in a variety of ways, but we still get similar conclusions:

From an indicator perspective:

Overall, the charts are not indicating a strong bullish movement is on the near-term horizon. They reflect uncertainty and bearish overall conditions. This is a tough market to trade.

Putting It All Together

If you believe Bitcoin and crypto have a future, it’s a good time to invest for the long term. Shorter-term trading will be extremely challenging. Given the overall global situation, we may continue seeing heavy whipsawing for the next couple of months.

This is a snapshot of our portfolio. This is provided to give you insights into our real-life decision-making. This has not changed significantly since last month.

It is important to note that nearly all of this money is working for us. We are not relying on appreciation alone.

This is a critical point: these investments are automatically buying back in like-kind each month. Even if we don’t explicitly invest, these positions are growing and cost-averaging on their own.

If you’re investing for the long term, be sure to see our guide Simple Ways to Earn Interest on Your Crypto Holdings.

As always, ensure your crypto portfolio is an appropriate percentage of your overall savings and investment plan. You need to determine your goals, risk tolerance, and ideal allocations.